From May 18 to June 3, 2016 Mars will be at its brightest.  Just go outside and look up (SE) for a bright “orange star” that does not flicker. That will be the “red” planet Mars.

It takes the planet Mars about two Earth years minus 50 days to make its trip about the Sun. Mars appears brightest * in our Earth sky when Earth is in the line between Mars and the Sun.  This happens about every other Earth year. Those other years Mars appears dimmer in our sky because at those times Mars and Earth are on opposite sides of the Sun. Some opposition years find Mars and Earth not only on the same side of the Sun, but also in closer proximity. 2016 is one of those years. Enjoy the view!

This year to the unaided eye Mars looks brigher and through a telescope Mars looks larger. Enjoy close-up views of the planet Mars and other wonders of the night sky at the June 10 and 11 Amateur Astronomers Association of Pittsburgh Star Parties scheduled at the Wagman Observatory and at the Mingo Observatory.

END_OF_DOCUMENT_TOKEN_TO_BE_REPLACED

There is now 100% that tonight’s SP is canceled. See yinz in June. The next good weather that we will see will probably be next weekend during Full Moon. Typical for our area. Except for that week or so in Mid-April, it’s been a lousy Spring. The Sky gods are probably balancing out the good observing weather in Jan, Feb and March.
Tom Reiland

Amateur Astronomers Association of Pittsburgh opens Wagman Observatory to the public Friday, May 13 and Saturday, May 14, 2016. No reservations. No charge. No limit to group size. Just show up. Please refer to the Wagman 2016 Star Party Schedule for details.  The Nicholas E. Wagman Observatory is located in Deer Lakes Regional Park, Frazer Township, Pa., near the village of Russellton in northeastern Allegheny County and some 18 miles from Pittsburgh. Observatory Phone 724-224-2510.

END_OF_DOCUMENT_TOKEN_TO_BE_REPLACED

Public Viewing of the Transit of Mercury at Mingo Observatory:

AAAP has announced safe public viewing through the Lunt solar telescope of the Mingo Observatory in the Washington Observer-Reporter beginning at approximately at 8 AM.  Astronomy club members arriving earlier who set up their telescopes on the hill will not have the orientation of the observatory building blocking the low eastern horizon and will get to view the transit from the start.

May 11, 1016 Update:Many AAAP members and members of the public enjoyed live views of the Transit of Mercury from our two observatories, Wagman and Mingo. Enjoy the Mercury Transit video from NASA’s SDO. It is the May 11, 2016 NASA Astronomy Picture of the Day (APOD).

END_OF_DOCUMENT_TOKEN_TO_BE_REPLACED 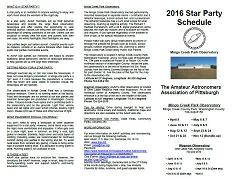 Amateur Astronomers Association of Pittsburgh opens Mingo Observatory to the public Friday, May 6 and Saturday, May 7, 2016. No reservations. No charge. No limit to group size. Just show up. Please refer to the Mingo 2016 Star Party Schedule.  The Observatory is located in Mingo Creek County Park, Nottingham Township, and is 10 miles east of Washington PA. The park is located off Route 88 or Route 136 in the northeast section of Washington County. Inside the park, the observatory is at the end of Mansion Hill Ext. Road (across from the Henry Covered Bridge) on the top of the hill past Shelter 10. Observatory  Site: Lat: 40° 12’ 42” N Long: 80° 1’ 14” W Elevation: 1180 ft. (360 m). Observatory Phone 724-348-6150.