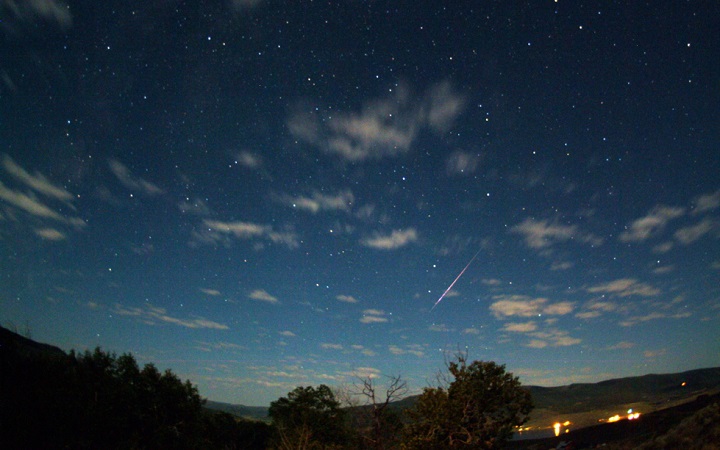 The Greater Pittsburgh Area  public is invited to view the 2016 Perseid Meteors with the  Amateur Astronomers Association of Pittsburgh at six viewing events including the designated Perseid Viewing Party at AAAP’s Mingo Observatory, August 11 into the morning of August 12, 2016, AAAP’s Wagman Obseratory August 11-12 Perseid Meteor Viewing and the regular August Star Parties at Mingo Observatory and at Wagman Observatory, Friday and Saturday evenings, August 12 and 13, 2016.

The regular Friday and Saturday star parties will be regular hours, generally beginning at dusk. Wagman’s Thursday Perseid Meteor Event (See more below.) does not begin until after 12 Midnight and ends before 5 AM, and will only occur under clear skies. The Thursday Mingo event begins at 9 PM and carries on long past Midnight in order to avail that night’s anticipated outburst of Perseid meteors, which may be as high as 200 meteors per hour. To catch this rare opportunity  no equipment or  experience is needed, as meteors are best observed with the unaided eye. With peak occuring in daylight the morning of August 12, best viewing is projected to be between moonset and prior to the first light of dawn Friday morning, August 12.

Mingo Observatory will open to the public for Perseid Meteor Viewing at 9:00 PM on the night of Thursday, August 11, into the morning of Friday, August 12, 2016.  Address: 1 Shelter 10 Road Finleyville, PA 15332. Located within Mingo Creek County Park, Washington County, at Henry Covered Bridge, go up Mansion Hill Rd., pass Shelter10 to the right, up the Hill to the observatory at the top of the hill. Mingo Observatory Phone: 724-348-6150. Mingo Park Map. Latitude 40.211 degrees Longitude -80.020 degrees. Google Map.  When programming your GPS, longitude and latitude are suggested rather than the address. Event is scheduled Conditions Permitting but the long range weather forecast looks good. There is no fee for this event, but your donations are gladly accepted at the reception desk to support this and similar events. AAAP is a 501(c)(3) and contributions are tax deductible. Simply bring a chair, a lounge or a blanket to comfortably settle back to observe meteors streak across the sky. Our all volunteer helpful and knowledgeable staff will assist you in enjoying the event. This free and open to the public event attracts a multitude of astronomy enthusiasts and many families. Weather permitting.

Wagman Observatory will open only if it is clear for a special pubic meteor viewing on Thursday, August 11, 2016 suggesting a start time of 12 Midnight, because of the bright moon and the peak being in daylight this year.  Guests are to plan to have exited the Wagman Observatory grounds by 5 AM.  Wagman Observatory is located inside Deer Lakes Park,(map) Allegheny County, at 225 Kurn Road, Tarentum, PA 15084. Coordinates: Latitude 40.627 degrees N, Longitude 79.813 degree.  Observatory Phone 724-224-2510. Helpful and knowledgeable volunteer staff will assist in enjoyment of the meteor watching and observation of the night sky. Please avoid white lights in the eyes.  No equipment is needed to enjoy the meteors. There is no alcohol or smoking permitted on the grounds. Guests should be aware of pedestrians, especially children and those already seated or reclining to observe the meteors and drive most cautiously. Also be alert to traffic when walking, standing or selecting meteor viewing location. This event is weather permitting and is free and open to the public. Donations gladly accepted.

Meteors are best viewed with the unaided eyes and the observatory and members telescopes will not be the “focus” this meteor viewing event.  As staffing and conditions permit there may be some telescope viewing and, or planetarium programming, but the real show is in the sky outside of the observatory building.

The annual August Perseid meteor shower ranks as the favorite meteor shower of the year peaking on August 9-13, 2016, with high rates for several nights on either side of the peak. On a dark, moonless night, you can often see 50 or more meteors per hour. This year there is an outburst predicted the night of August 11 into the morning of August 12 offering possible rates of 200 meteors per hour.  The predicted outburst along with the 12:18 AM Moonset make this an optimal year.

The Perseid Meteor Shower is more likely than any other to produce unusually bright and large meteors called fireballs. Enjoy a 3 minute instructional NASA video about fireballs here. Be aware video’s dates are off from 2016 dates.

To plan join our Perseid Watching Party on August 11,2016 no reservations are needed. Follow the weather and prepare accordingly. Bring a chair, a bottle of water and snacks if you like, outdoor footwear and possibly insect repellent.  Please make this a zero litter event. There is no alcohol or smoking permitted on the observatory grounds. Be alert to pedestrians and especially small children and those who may be seated on the ground.  If electing to be directly on the ground, locate far from vehicle traffic. Please avoid white lights in the eyes of those already dark adapted for viewing. Automobile light shined into the eyes of those already observing can detract from the viewing experience. It can take 15 to 20 minutes for the eyes to become dark adapted each time bright lights interrupt viewing. Please park your vehicle at the bottom of the hill and walk to the viewing spot of your choice, and prepare to settle back and be amazed. There is limited  handicapped parking adjacent to the observatory building. Give yourself at least an hour of observing time because these meteors come in spurts and are interspersed with lulls and because it will take your eyes 20 minutes to become accustomed to darkness.

The 2016 Perseid Peak Rates are predicted to last about half a day, from late August 11 to mid-August 12 UTC. For Eastern Daylight Time (EDT) we subtract 4 hours from Coordinated Universal Time (abbreviated UTC).  That makes late Thursday night into Friday morning the best time to come to our hill and pick out a spot to see nature’s fireworks. Thursday’s Moon sets after Midnight, at  12:18 AM Friday morning darkening the skies for even better viewing. In the meantime don’t wait until the peak nights of the 2016 Perseid shower to watch for meteors. Start watching now as other smaller meteor showers are peaking the  last week of July, and early Perseids are already gracing the sky. Find a dark location, allow eyes to become dark adapted and look at the sky, really anywhere in the sky. It is fun to observe meteors with a group of friends where you all face toward each other and look over each other’s shoulders to the sky.  That way the entire sky is under surveillance. One can alert others calling out when a meteor is spotted. 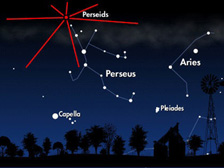 The Perseid radiant, or point in the sky where the meteors seem to originate, does not rise until around 11PM, varying with your horizon, elevation and particular date. After the radiant is high enough and when your neighbors turn out their lights (usually after 11:30 PM), viewing improves.  Do not rule out early evening viewing completely.  The stunning “earthgrazers” are most likely to occur near the time of radiant rise and set. Earthgrazers are the low, slow, colorful meteors traveling horizontally across the evening sky. They are rare but most exciting and memorable if you should be so lucky to see one. Sometimes they even produce sound.

The meteors themselves are dust particles and larger fragments left in the trail of Comet Swift-Tuttle. Before the particles burn in the atmosphere they are called meteoroids. These bits and pieces of Comet Swift-Tuttle collide with the Earth’s upper atmosphere at some 210,000 kilometers (130,000 miles) per hour. Heat of friction with the air molecules causes them to burn, lighting up the sky with fast-moving Perseid meteors. If our planet happens to pass through an unusually dense clump of them,we’ll see an elevated number of meteors, as predicted for this year. We can always hope! 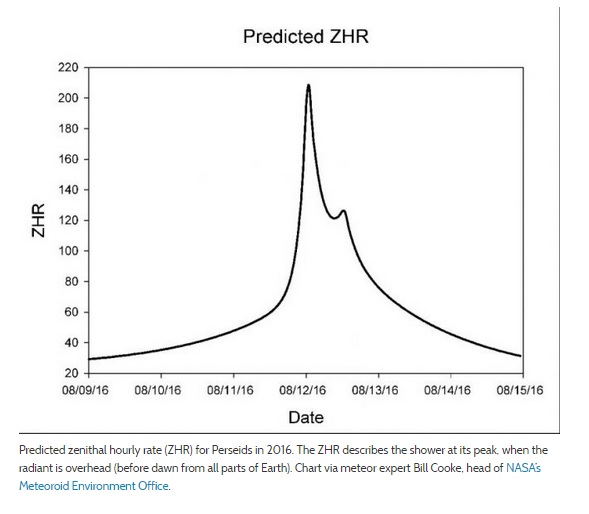 The regular star parties (Friday and Saturday, August 12 and 13) begin at dusk, and sometimes earlier for safe solar viewing and feature views through the observatory and member telescopes. The Mingo Observatory Star Parties also offer planetarium sky shows and lectures.